"Tales from the Database Clues for Profit?" Series_ Part 1

Tales from the Database

I have 3026 issues in my database and that will be moving higher. In previous posts I have defined my metrics that I apply in my journey of comic-book speculation. We must attempt to move away from emotional opinions as we become trapped within our cognitive biases. Development of metrics allow you a chance to leave your "feelings" behind as you can.

Biases are the traps that we as comic-book speculation players must acknowledge. Biases should be considered tendencies that lead us away from good or better judgments. So using our emotional driven heuristics that occur during our fast and frugal approaches to a investment decision, cognitive biases will exist as “land mines” we must be aware of.  There are a lot of documented cognitive biases.

You look to prove a conclusion and ignore evidence to the contrary. If you only look for positive data in your investing then you can miss the outliers. You tend to gloss over any suggestions that your conclusions could be faulty.  An example is a popular thought that movies make us money? Thus as you filter through news reports, radio and TV shows, the twittersphere and the web, you focus only on positive data and thus feel very confident!

To fight this bias, I would suggest you form a question and then ask the opposite of it. Therefore in this case the opposite question would be; “Can you make money from comics not featured in movies”? What evidence exists to tear down this hypothesis? Find evidence from writers etc that support the opposite approach.

Overconfidence implies that you have decided the conclusions beforehand and you refuse have any doubts. This path leads to self-delusion. However, the opposite can be true and in over-prudence your estimates and conclusions are too safe and conservative.  Over-prudence lead to you missing sleeper issues to be bought. In either situation you either invest in too many gambles or not enough. Trying to be just right!

Understanding your temperament as previously discussed can let you predict where you fall on the scale from Over to Under Confidence. Fighting these two biases requires you to know yourself. Do you only invest when it’s a sure thing or you like to gamble on the direction of the wind?

If you are overconfident, then use wisdom of the crowds to compare your comic-books rankings to the current prices. Why are there differences between your opinion and the public?  Think about the opposite evidence as to why the public/price guide might be right? What are they seeing that you are ignoring?

The opposite bias occurs because you are too prudent. You discount that hot new thing who the public is missing.

This bias can be thought of as “It’s business as usual with nothing new to be thought about. I know it all!”. You can think about this like "I did this investing approach based on this information last year and made money so I don’t need to change my ways. I have cracked the profit code!

Your bias is really against anything new. You can miss out on changes, market movements and better approaches. Never be satisfied with how you are investing. Be awake to the new patterns and ways to make money.

The hindsight bias is explained as thinking that all events are easily explained after the fact. A person believes he or she "knew it all along". As the song says hindsight is always 20/20. Force yourself to write down your thoughts beforehand then checking on the results afterward. How do these investment play out over the year (s)? Be honest were you right or wrong?


Below I begin throwing out some data as decision aids for you. 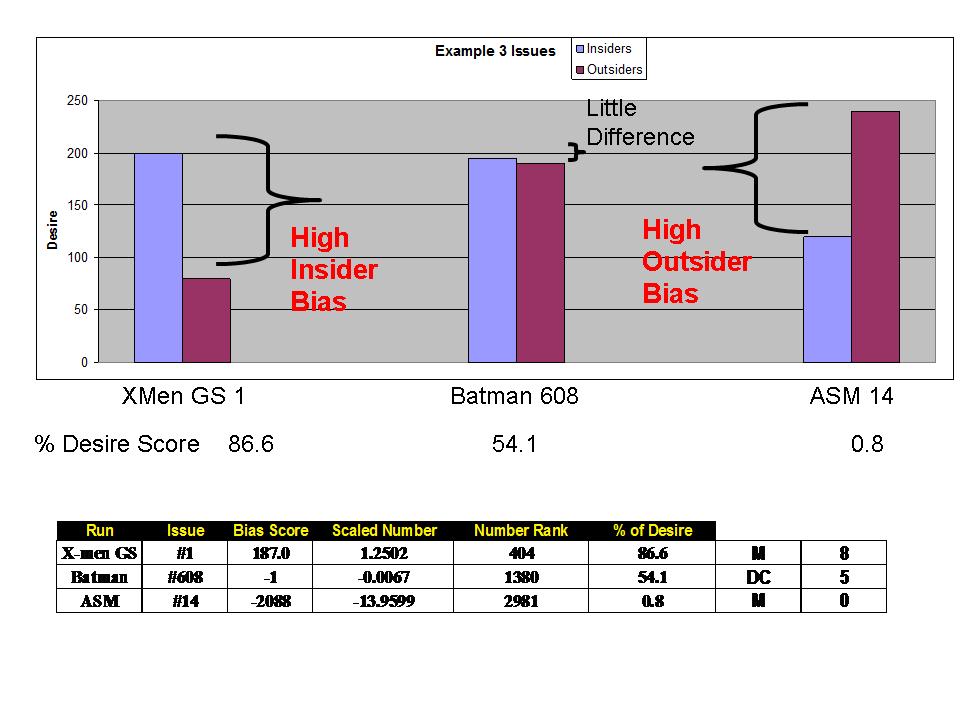 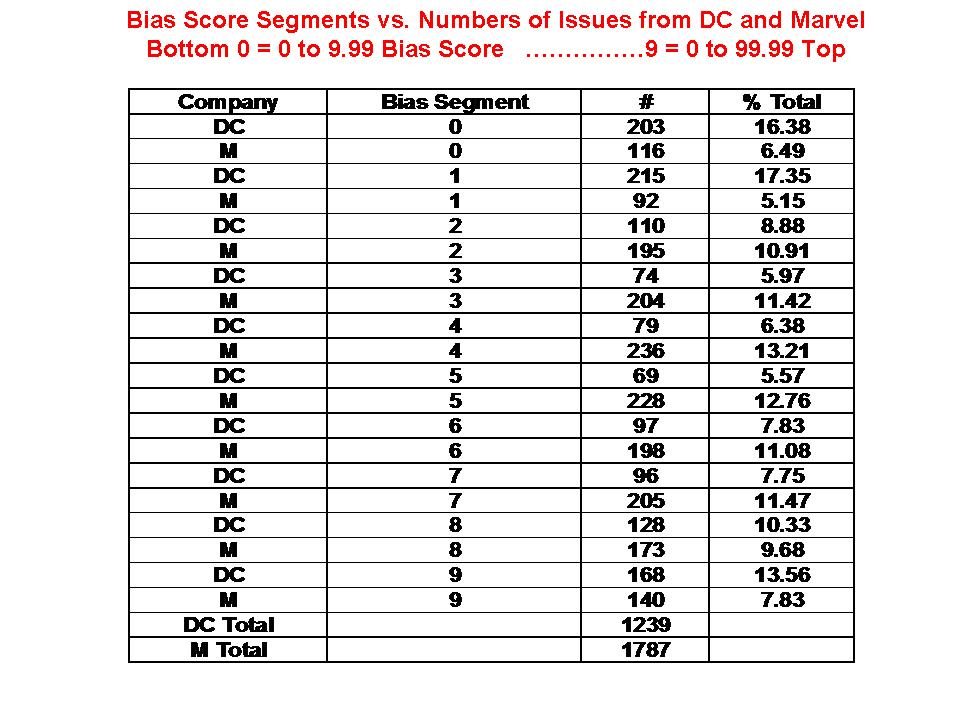 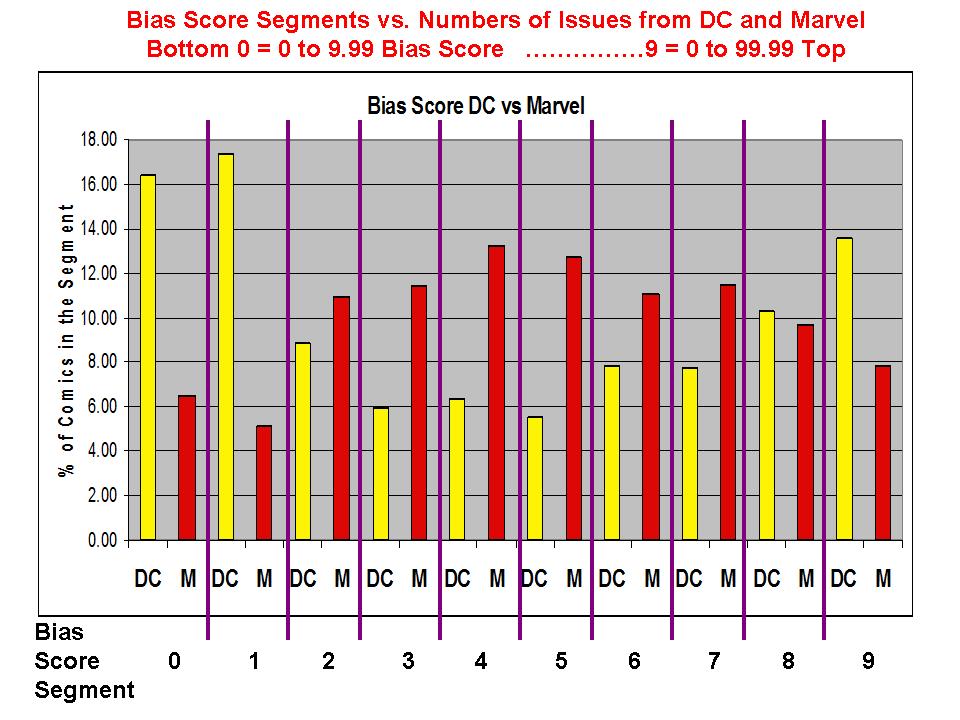 Tables 3 to 5. Break Down of each Run and the Number of Issues in each Bias Segment 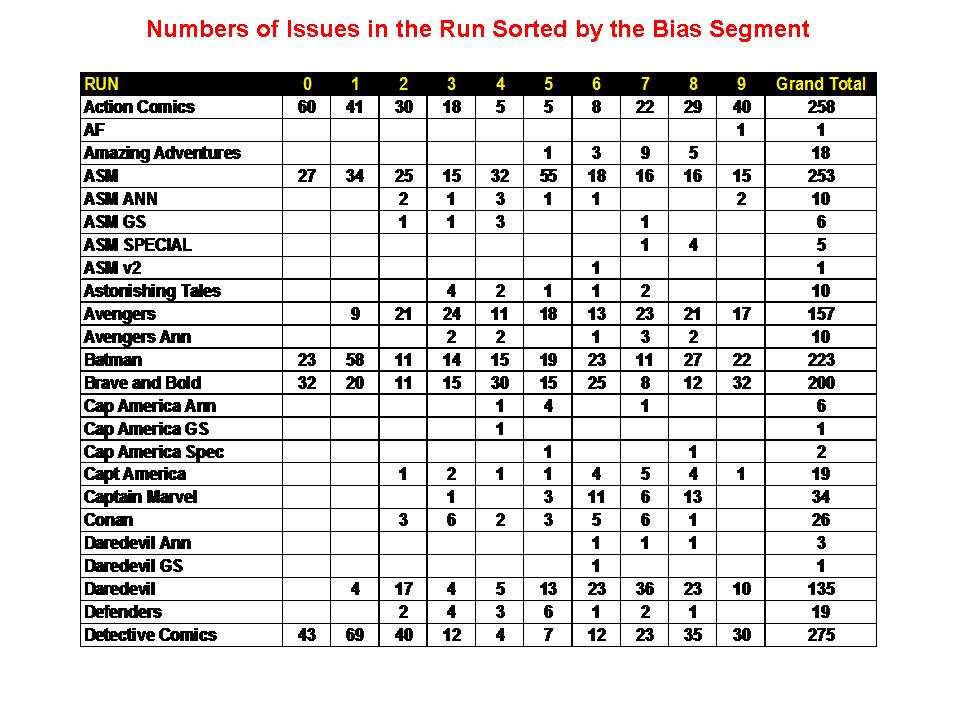 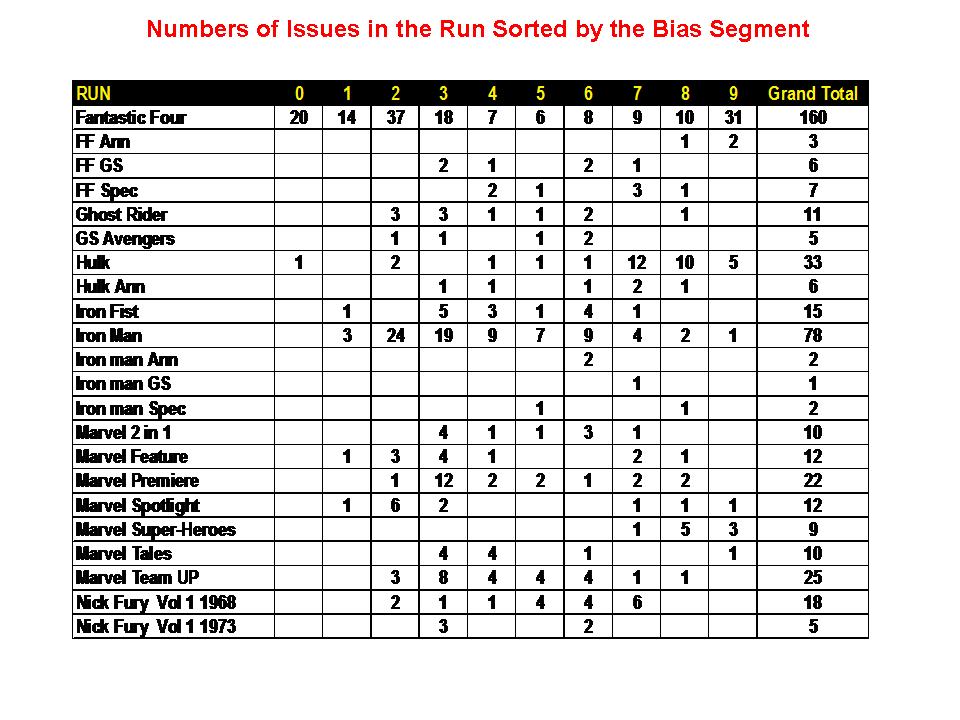 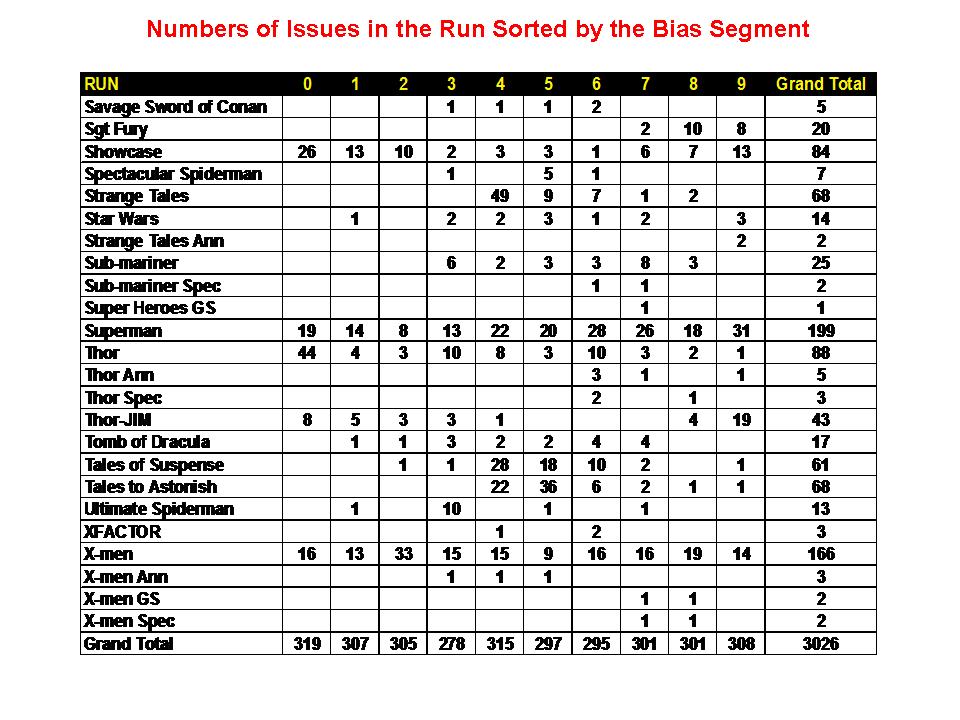 Tables 6 to 15 Present the Data by Segments and Companies 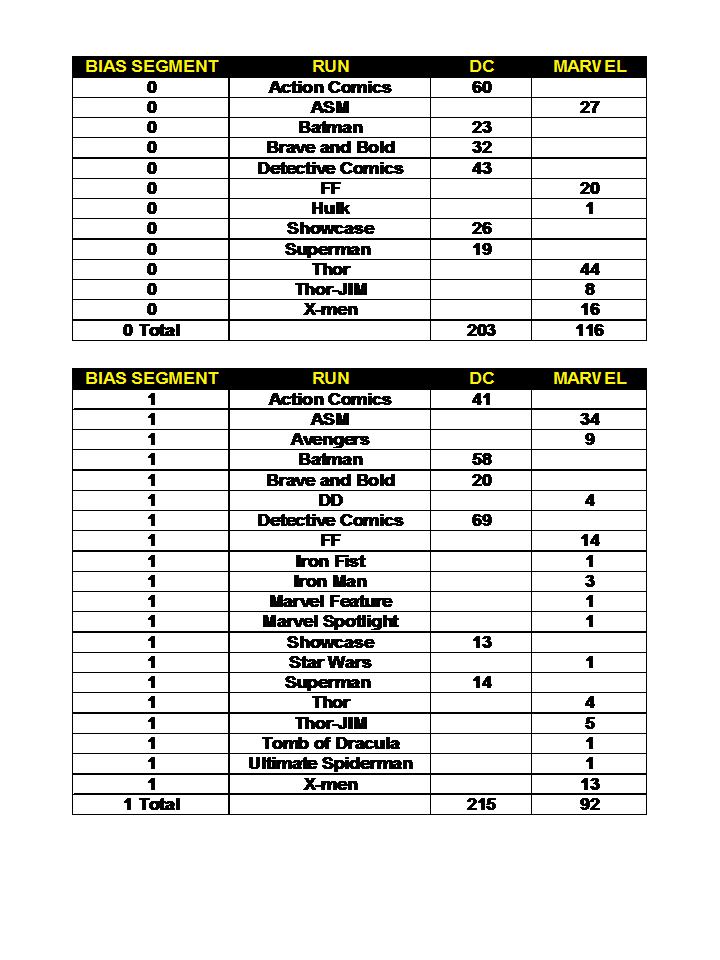 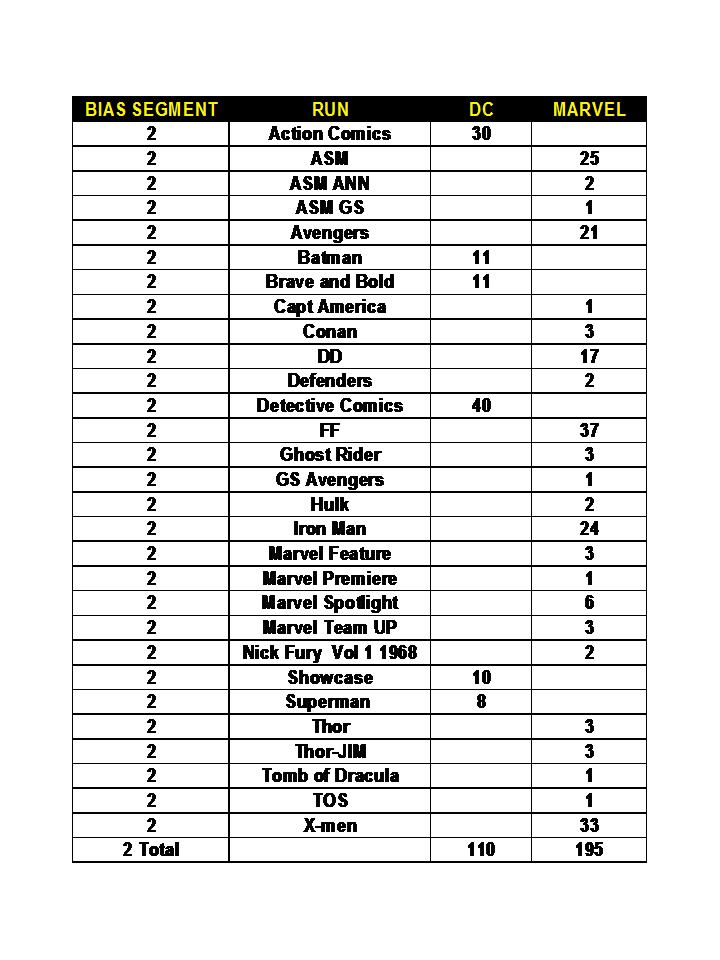 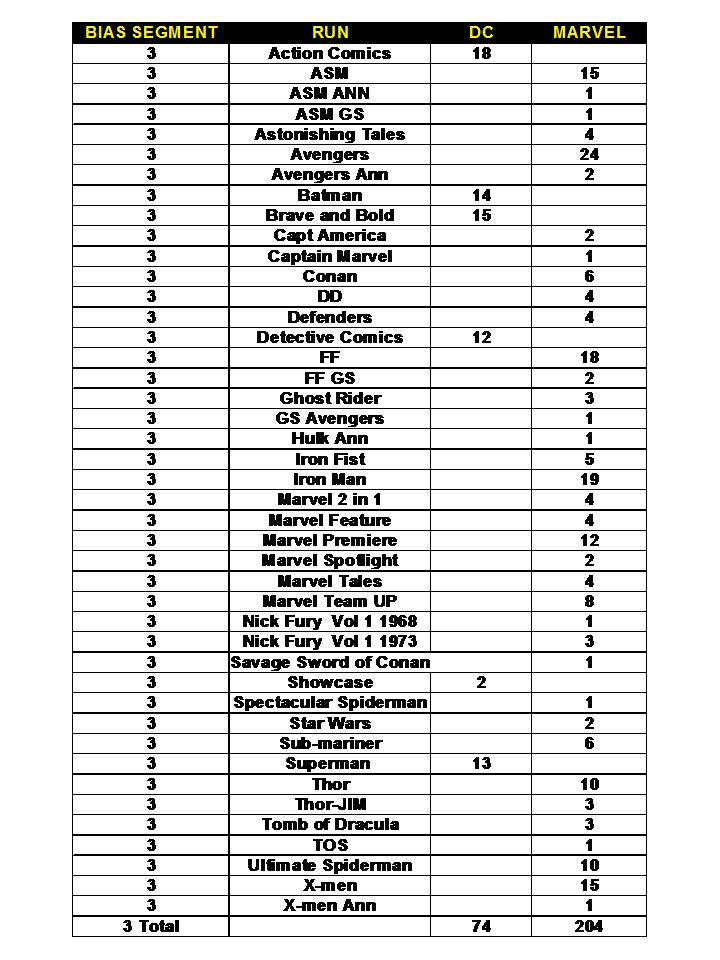 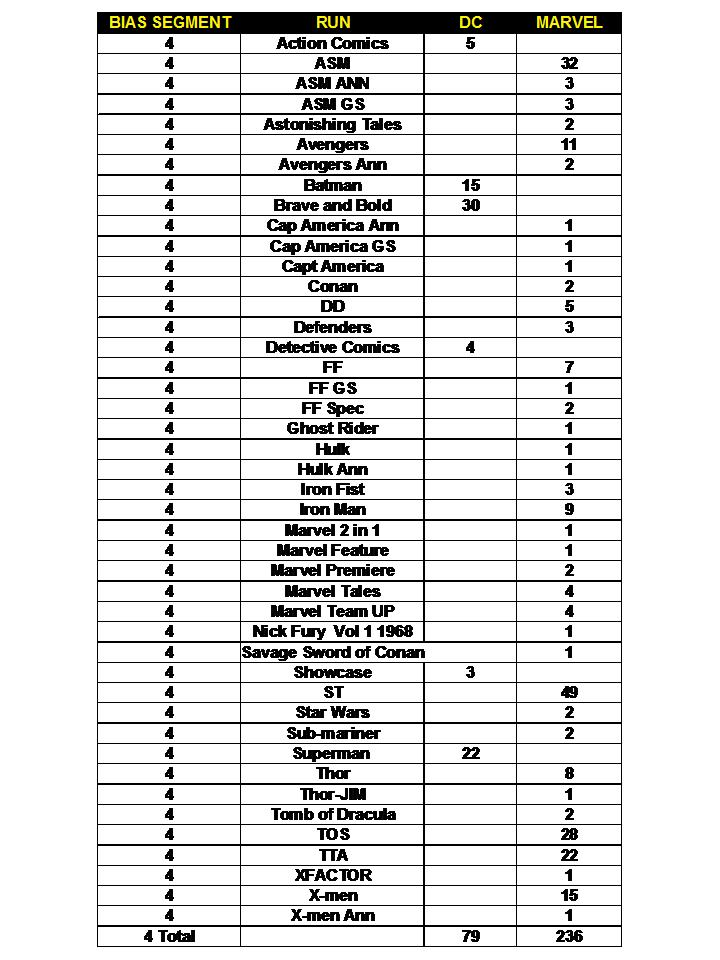 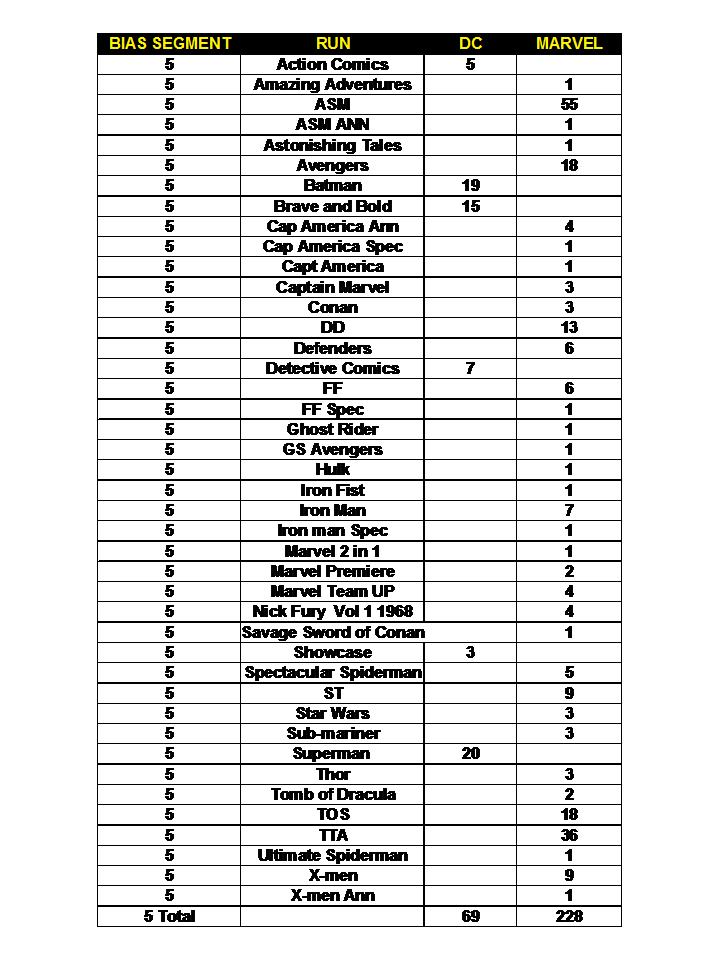 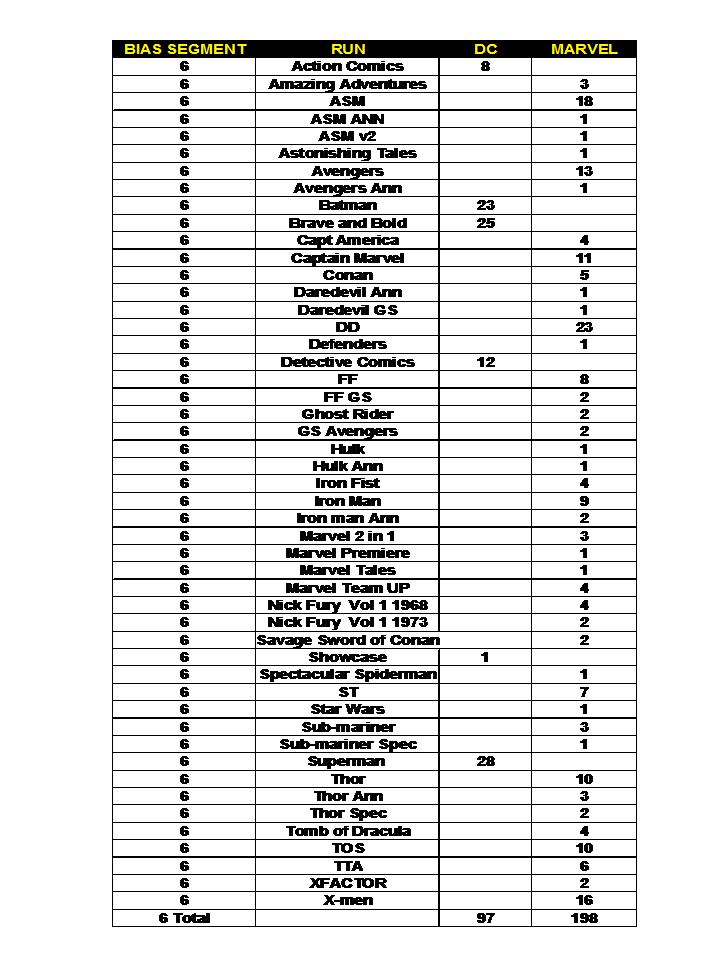 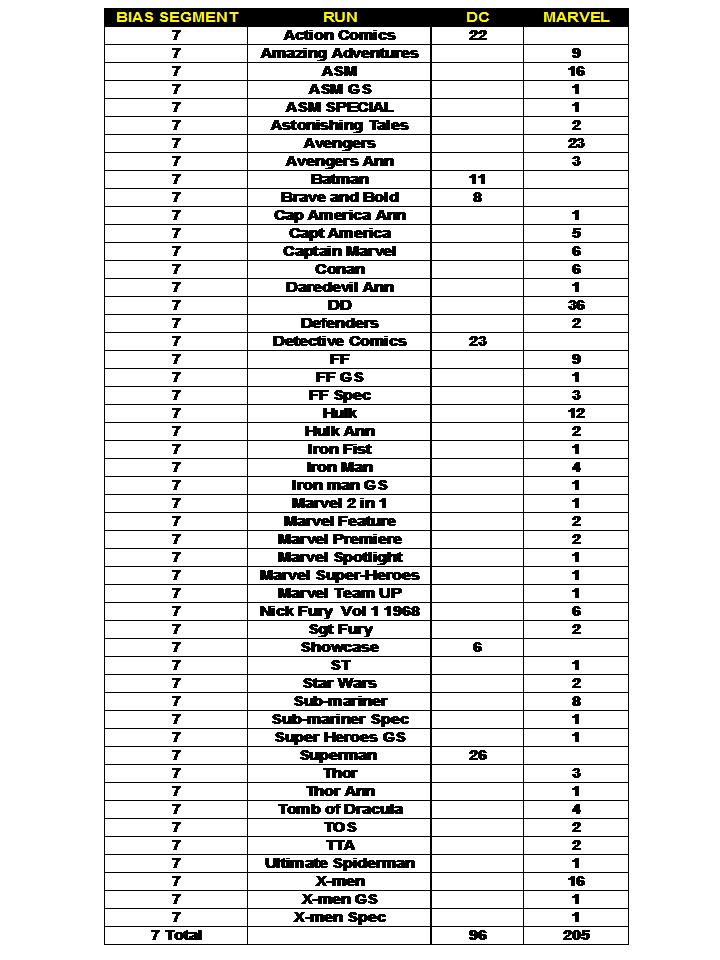 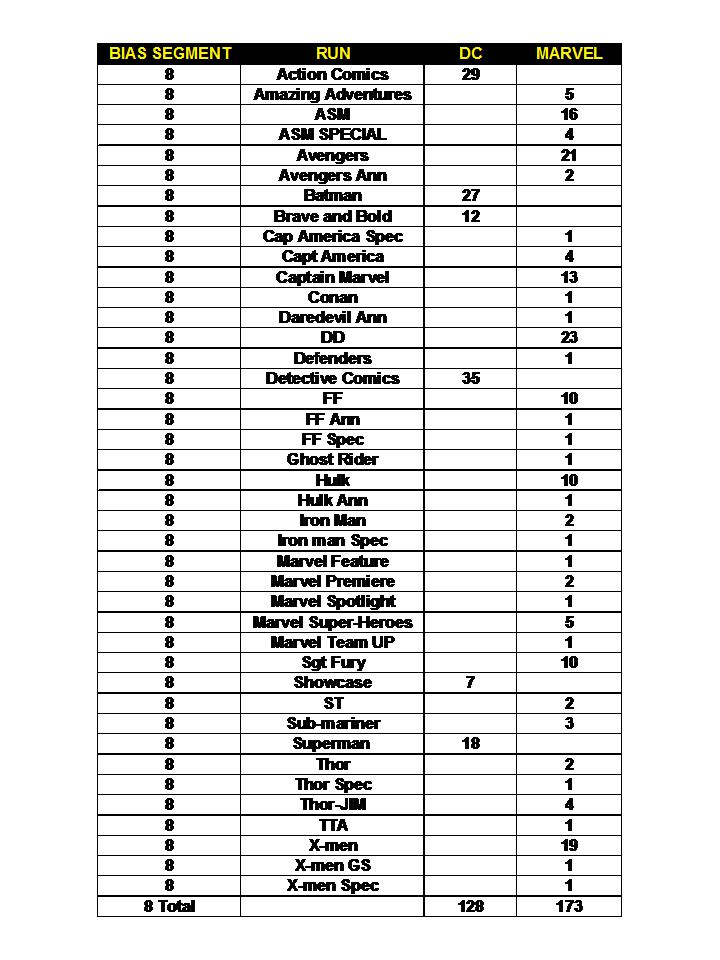 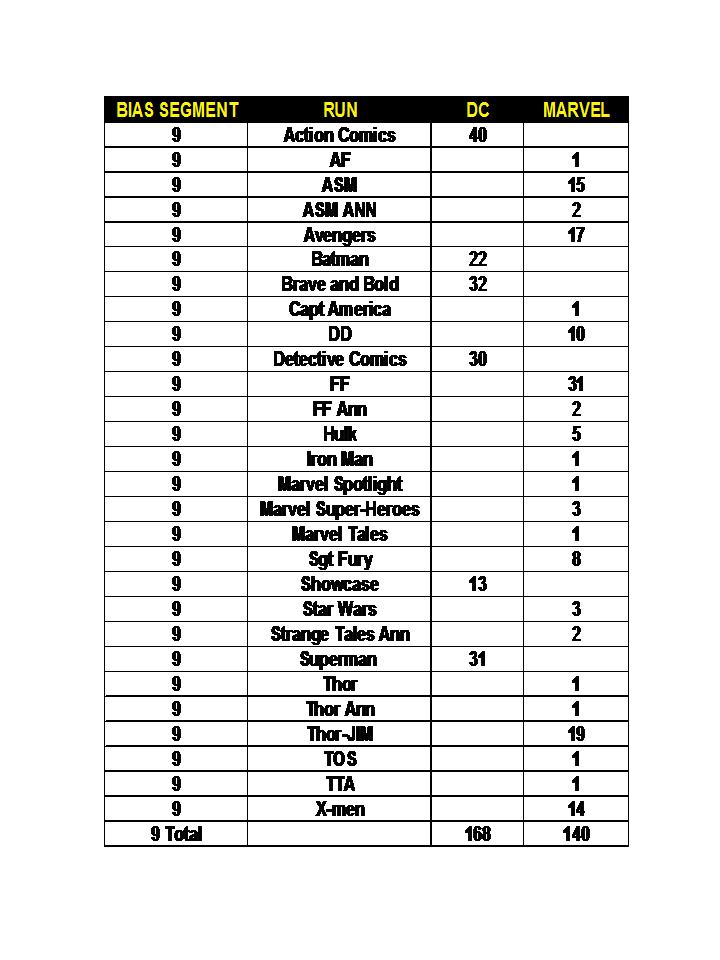