Investment Analysis of Green Lantern #76 to 89

** Remember my data does not imply comics are not valuable or collectible. It is a mathematical way to see the desire between the hard high dollar investors and the small investors. We are looking for the comic issues being supported by the Insiders while still being relatively ignored by the outsiders. If you think of it as two sides of a scale, then we are looking for issues out of balance to the insiders. We avoid issues tipped to the outsiders.

I have seen that sometimes key issues are balanced (B Score  near 0) or outsiders biased (Negative B Scores).  ASM #14 has been up to this point a very key comic that was outsider biased. Everyone, I mean everyone wants it. We in my view must look elsewhere for opportunities.

We today have arrived at another very key,  GL 76! Its a valuable key comic but is it currently outsider biased with a -295 and thus is not considered an opportunity.

Go back and review ASM 14. Same deal! I must walk against the public to find opportunities. Seeing ASM 14 and GL 76 outsider biased to me supports my methods and keeps me moving forward. **

Table 2 data deals with another data stream on comic-book issues. This run’s issues are looked at 3 grades 9.4, 8 and 6. The changes in bias between the different grades are calculated and the SLN numbers were born. The SLN numbers look into each “world” of the I vs. O bias data. This data has shown historically to be the most liberal and establishes the investment potential across the grades of 9.4, 8 and 6. Very quickly, the green stained are positive issues and red stained issues are a negative and invite a non-focus in only investments We then compare those SLN numbers and generate a difference number we call the DF. Finally add the I and O SLN numbers together (total) and determine the %DF number for each issue. Green staining is good (Higher Bias) and Yellow and Red are issues that are not good for an investment focus. This data stream is more liberal in the rigor and you get the best case for an issue.

Table 5 is the last bit of data, the Scaled Desire Ranking. I have grouped 3364 issues of comics that I have covered and developed scaled desire rankings. The percentile that an issue occupies gives wonderful insight into true value between titles. So we position our title and its key issues in context. A score of 99 means that comic issue is desired at the highest level while 1 percentile is the lowest desired issue. (Green High-Red Low -Yellow staining implies uncertainty- opportunity?) 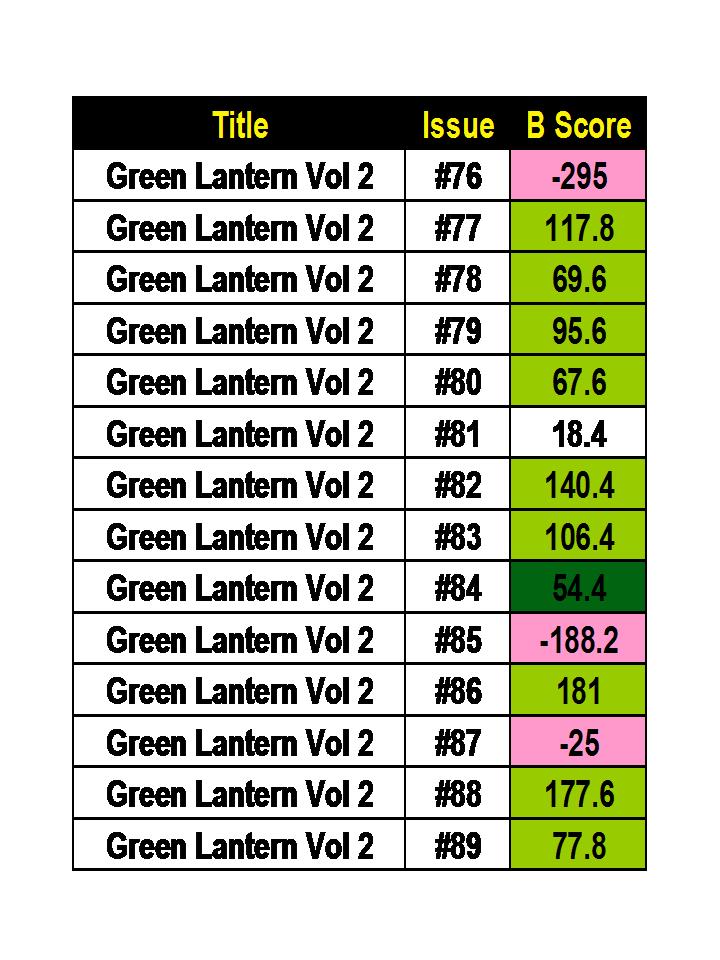 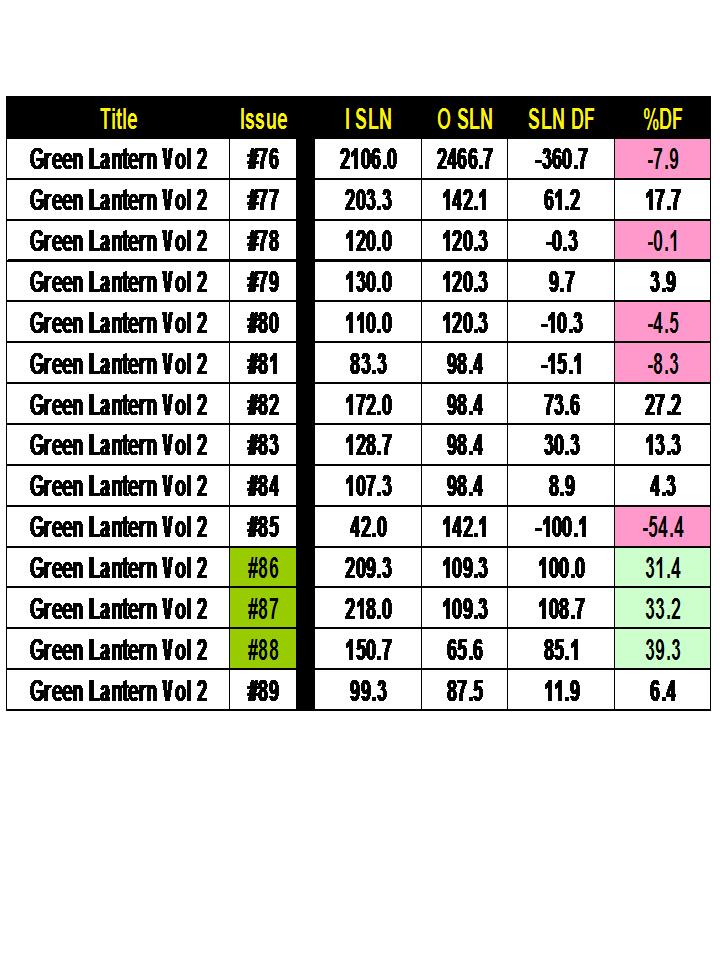 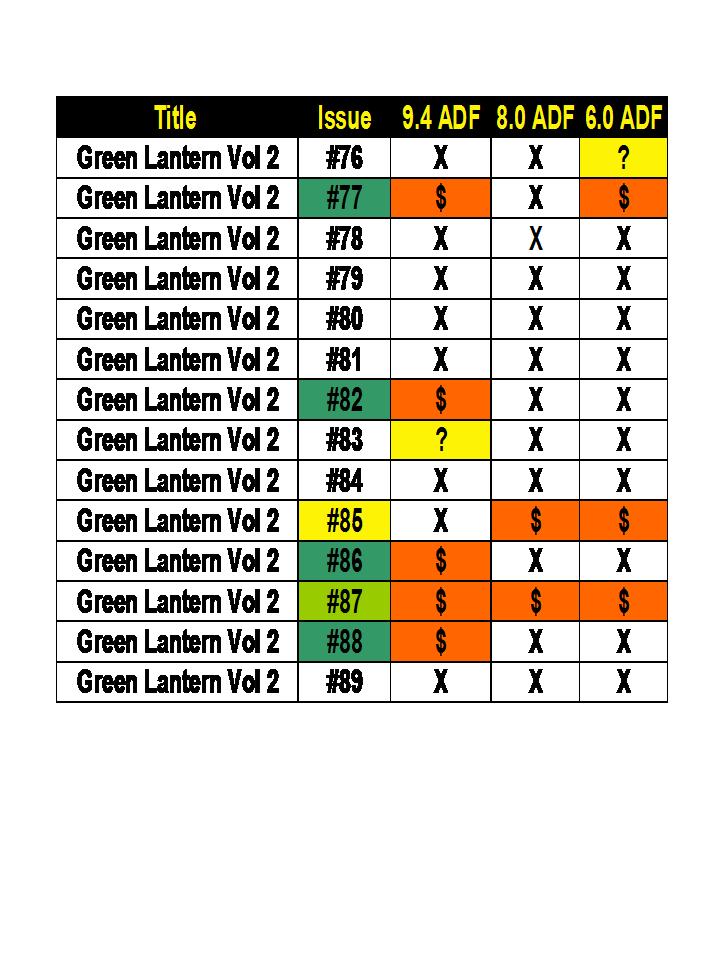 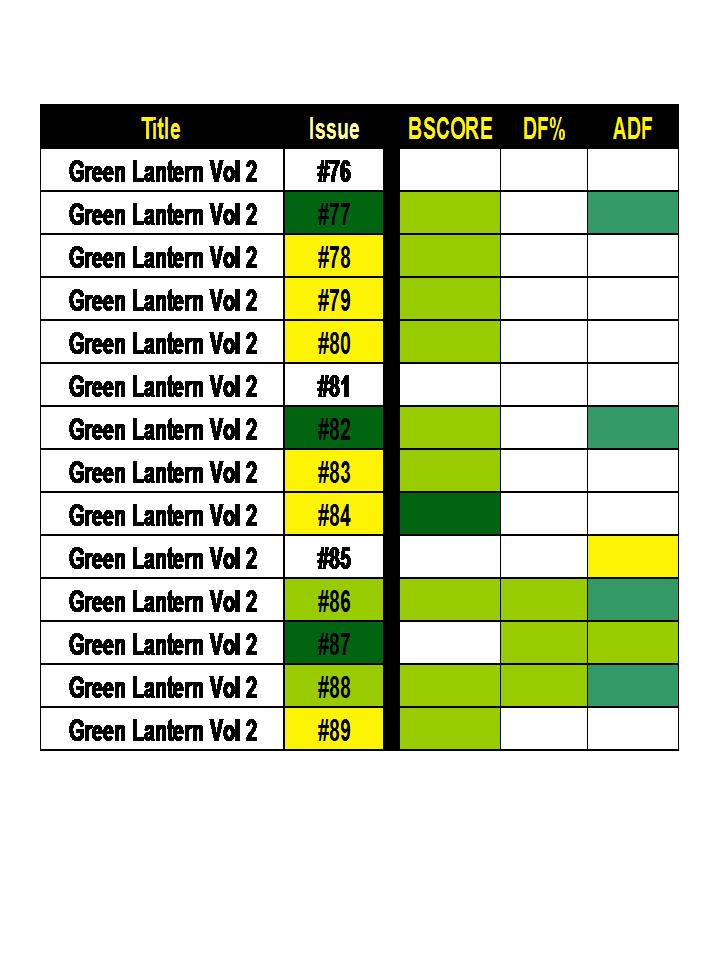 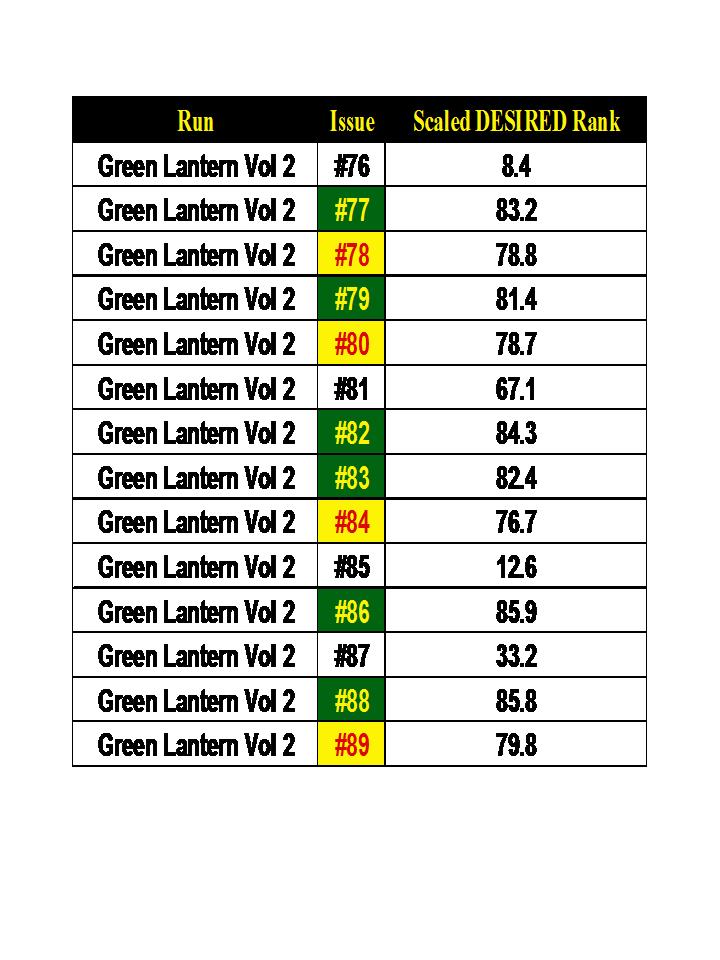 Investment Analysis of Green Lantern #76 to 89